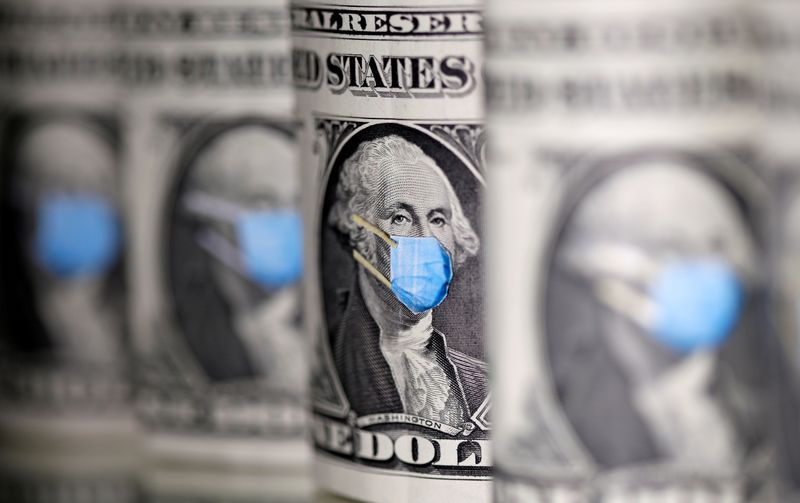 The dollar nursed losses on Thursday after the U.S. Federal Reserve left the door open to more monetary easing and dampened expectations for a quick economic recovery from the coronavirus pandemic.

The greenback was also weighed down as signs the pandemic is receding in other countries and reduced safe-haven demand for holding funds in dollars. Additionally boosting appetite for riskier currencies was positive trial results of an experimental COVID-19 treatment.

The euro held steady before a European Central Bank meeting later on Thursday where policymakers are likely to expand debt purchases to include junk bonds and take other steps to ease conditions in credit markets.

More countries are taking steps to re-open their economies as coronavirus infections slow, giving some cause for optimism.

However, it will likely take several months for U.S. consumer spending to fully recover given the massive job losses, which has discouraged any extensive dollar buying.

Expected that dollar/yen to drift lower. The euro can benefit from dollar weakness as long as the euro-zone government bond spreads don’t widen a lot.

After a two-day policy meeting ending Wednesday, the Fed kept interest rates near zero and promised to expand emergency programs as needed to help the battered economy.

Fed Chairman Jerome Powell offered no sanguine words about how fast the country might return – if ever – to the near-record low unemployment and solid growth of just a few weeks ago.

Sentiment for the dollar also took a hit after data on Wednesday showed U.S. gross domestic product fell in the first quarter at the sharpest pace since the Great Recession.

Economists say the second quarter could be even worse.

The United States and other major economies forced businesses to close and kept people at home to slow the spread of the novel coronavirus, which slammed the brakes on global growth.

The euro was little changed at $1.0867 on Thursday. Against the pound, the common currency traded 87.25 pence.

The ECB, which announces its policy decision later Thursday, is under pressure to keep government bond yields from rising after rating agency Fitch cut Italy’s credit rating to one notch above junk due to the financial burden of the coronavirus outbreak.

The ECB is already printing money at a record rate to buy up ballooning state debt.

However, European Union officials have struggled to agree on the details of a joint recovery fund, which shifts the burden to the ECB, analysts say.

The Australian dollar traded at $0.6550 on Thursday, close to a seven-week high in a sign of improving risk sentiment among some investors.

The Aussie has also benefited from the country’s success in containing coronavirus infections.

The New Zealand dollar also edged to a six-week high as economic activity returns following the end of one of the world’s strictest lockdowns related to the coronavirus.