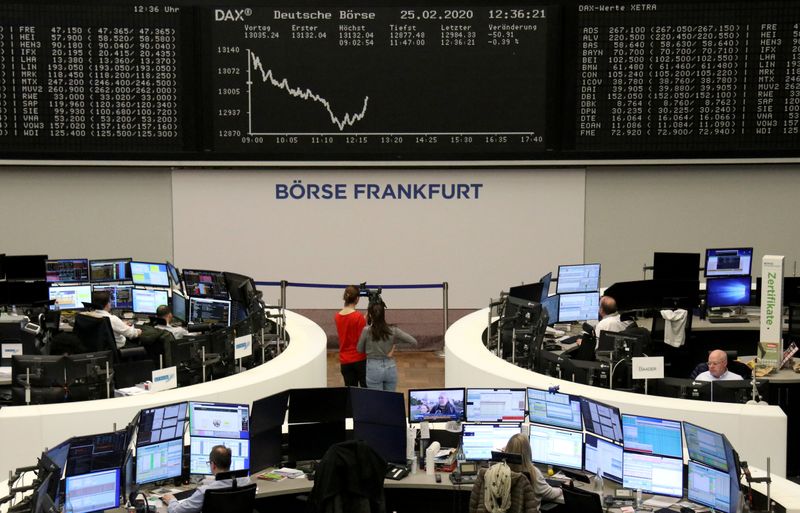 European shares attempted another rebound on Tuesday as a fresh wave of monetary and fiscal stimulus halted a global selloff in equity markets, but growing evidence of the economic damage from the coronavirus pandemic kept investors on edge.

In a co-ordinated global effort to stabilize financial markets in one of the biggest routs on record, Germany launched a stimulus package of up to 750 billion euros, while the U.S. Federal Reserve took unprecedented steps to shore up credit across the economy.

“It is probably just a natural reaction to the extent of the losses in the last few sessions rather than any one thing,” said Connor Campbell, analyst at spread better Spreadex in London.

“There’s always a caveat attached to the morning part of the European session because the U.S. session can change things so much that often the afternoon can be unrecognizable from the morning.”

After see-sawing about 3% to 4% in both directions last week, the benchmark European index is still down more than 30% since its record high last month in one of the fastest-ever turns to a bear market.

With entire nations under lockdown foreshadowing more pain for factory activity and business confidence in the second quarter, investors have largely ignored macroeconomic data from the first quarter.

“If the global economy is a tin bucket filled with water, the coronavirus outbreak has drilled multiple holes into it and monetary policy bazookas are unable to stop the water from leaking away,”  analyst said.

“The solution may have to be a new bucket, which in this instance is a cure to the coronavirus.”

Italian stocks  surged 5.7%, as latest numbers showing a slowdown in new cases of COVID-19 raised hopes that the most aggressive phase of the outbreak may be passing.

Travel and leisure stocks, which have posted some of the heaviest losses this month, rose 3.4%, while miners, insurers  and oil and gas stocks jumped between 7% and 10%.

France’s Biomérieux  was up 8.6% after the healthcare company won approval from the U.S. Food and Drug Administration for its product aimed at testing for coronavirus.