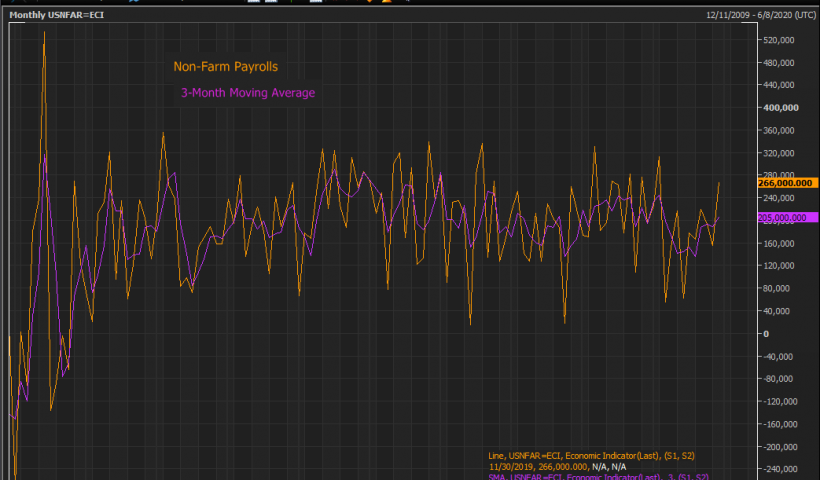 The Federal Reserve will finish its scheduled two day meeting of the Federal Reserve Open Market Committee (FOMC) on Wednesday December 11th. The governors will release the policy decision and economic and rate Projection Materials at 19:00 GMT. 2:00 EST. Chairman Powell will read his statement and hold a news conference starting at 19:30 GMT, 2:30 EST.

The US economy has gathered strength since the last Fed meeting on October 29-30.

Third quarter GDP rose from 1.9% to 2.1% at its first revision, unchanged had been the consensus forecast. The Atlanta Fed GDPNow estimate which reached a nadir of 0.3% on November 15th has rebounded to 2.0% as of December 6th.

The US labor market continues to produce jobs at near record numbers, unemployment has again reached a 50 year low and wage gains are giving consumers higher disposable incomes.

The three months moving average for payrolls jumped to 205,000 in November courtesy of the its 266,000 new jobs. The decline in the three-month average from 245,000 in January to 135,000 in July has been convincingly reversed.

Conclusion and the dollar

The Federal Reserve judgment at the last FOMC meeting that the US economy was heading for improvement and that global risks had diminished has proven to be accurate.  Whether Mr. Powell’s assessment that the US-China trade dispute has moved closer to a conclusion is still undecided but it drag on the economy may be lessening.   The fed funds rate will be unchanged and the neutral stance will be affirmed for the near future.

For the markets and the US dollar the key to this FOMC lies in the Projection Materials.  Will the governors mark down their fed funds estimate for next year to take account of the current 1.75% rate or will they see a brighter future and raise their GDP and rate projections for 2020.  This rather straightforward economic analysis will either propel or retard the dollar for the next several weeks.